USA Today reported the fight brought in 1 million pay per view buys with $US50 million ($64 million) generated from sales in the United States.

It was only the second fight of Paul’s career, while his brother Jake has fought in three professional boxing matches, beating former MMA fighter Ben Askren in April.

Paul hits back at critics

The YouTube personality rejects the suggestion he was assisted by Floyd Mayweather to make sure he lasted the full eight rounds in their hugely popular boxing bout.

Critics have labelled the bouts a sideshow due to the lack of sporting credibility of the duo, who made their names as social media personalities and have millions of subscribers on YouTube.

However, Mr Coker said the brothers had impressive physiques and the door was open for them to move into MMA.

“I met with Logan Paul about two years ago and I’ve spoken to Jake Paul’s manager and Jake on a zoom call recently… the one thing I said was, ‘Hey if you want to do MMA we would love to promote you guys’,” he said.

“These guys are young, athletic, strong and you saw the fight on Sunday night, these guys they came and did their work.

“Mayweather couldn’t finish him and I know he tried, I heard he wanted to knock this kid out so bad,” he added.

“When I heard both had high school wrestling backgrounds in Ohio, which is a prominent wrestling state in the US, it really made me interested in pursuing them in some super fights in mixed martial arts — and that door is continually open.”

The comments are in stark contrast to recent statements from UFC president Dana White.

“That wasn’t a f***ing boxing match,” Mr White said in an interview with UFC Arabia.

He said the UFC was not interested in the exhibition matches.

“Think about this — imagine if Kim Kardashian wanted to fight [UFC star] Amanda Nunes. How big do you think that fight would be?

Bellator, owned by Viacom, is gearing up for a busy month of events, starting with Bellator 260 and the headline fight between reigning welterweight world champion Douglas Lima and the undefeated Yaroslav Amosov. 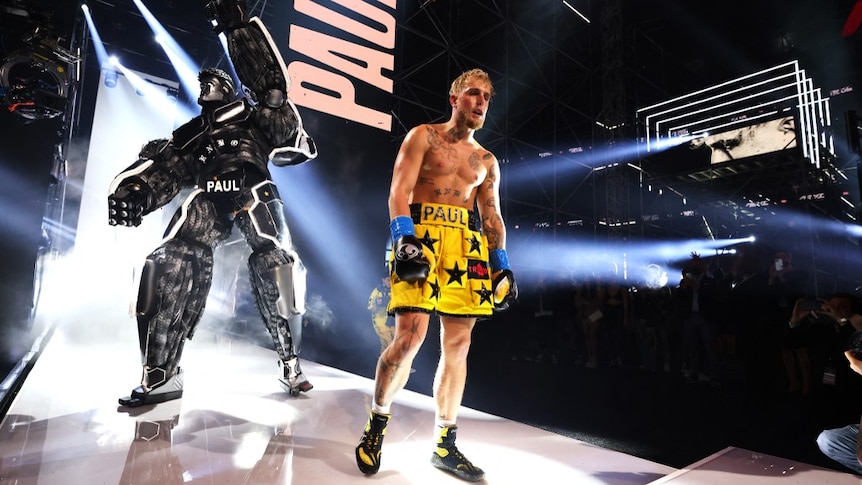 However, super fights and exhibitions are where Mr Coker is targeting a younger audience.

“My 14-year-old niece, I told her I was going to the Logan Paul fight and she thought that was the greatest thing,” he said.

“She asked me who he was fighting and I said Floyd Mayweather and she said, ‘who’s that?’ — I thought wow, she doesn’t know boxing, she doesn’t know MMA, she’s just a 14-year-old girl on the internet doing what they do.”

As the sporting world gears up for the delayed Tokyo Olympics starting in July, Mr Coker believes MMA will one day feature in future Games.

“When you think about mixed martial arts, what you’re talking about is boxing, wrestling, judo, taekwondo, karate, those are all Olympic sports,” he said.

“Why wouldn’t mixed martial arts eventually get into the Olympics, because six out of the seven disciplines MMA is known to use really is already there.

“There’d be a lot of details to work out but to me I think it will happen, it’s just a matter of time.”

Poll: Will You Be Using Motion Controls In Mario Golf: Super Rush?