The Finn, who started the race in pole, was flawless in the tricky conditions, beating Red Bull’s Max Verstappen by 14 seconds with the other Red Bull of Sergio Perez in third.

Lewis Hamilton, starting 11th after a grid penalty, lost the lead of the driver’s championship to Verstappen by finishing fifth.

Light rain fell on the circuit throughout the 58-lap race, while cold temperatures meant the track never dried out and drivers were forced onto intermediate tyres.

The conditions meant newer tyres would initially be slower but then quicken up, which gave teams a headache as to when they should pit.

While Bottas and Verstappen pitted with 21 and 22 laps left respectively, Hamilton and Ferrari’s Charles Leclerc — who finished fourth — tried to push their first set of tyres as far as they could go.

Ultimately, those who pitted earlier finished on the podium.

“I think from my side I’d have to say probably one of the best races I’ve had ever,” Bottas said.

“The car has been really good in every condition and I had really good confidence with it.

“It’s not easy to choose the strategy here with these conditions when to stop.”

The victory was Bottas’ 10th of his career and his first since the Russian Grand Prix in 2020.

After a grid place penalty meant Lewis Hamilton started from 11th, Sunday’s race at Istanbul Park was mainly about damage limitation for the seven-time champion.

With Verstappen all but certain to cover the two-point deficit he had in the driver’s championship, Hamilton made his way through the field trying to get as close as he could to the Red Bull driver. 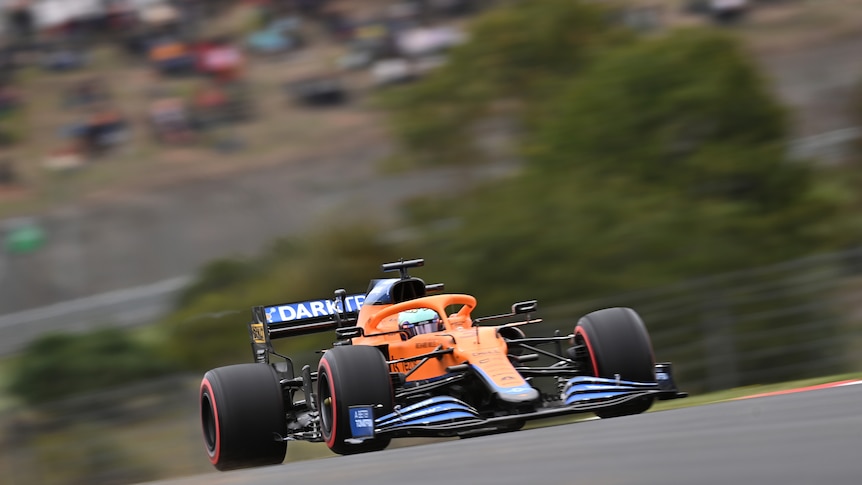 Australia’s Daniel Ricciardo has it all to do during Sunday’s Turkish Grand Prix after an early exit from qualifying.

Hamilton told his team he did not need to pit, believing the tyres he had since the start of the race would get him to the finish.

Sitting in third with eight laps to go, Mercedes convinced Hamilton to pit for new tyres.

This brought him out behind Sergio Perez and Charles Leclerc which seemed to take the Briton by surprise.

He spent the remaining laps bemoaning the decision over the team radio as he ultimately finished fifth.

The end result means Verstappen has a six-point lead in the championship, rather than a one-point lead if Hamilton had secured third place.

“Probably in hindsight I should have stayed out or come in much earlier,” Hamilton said.

“A bit frustrating but it is what it is.”

Mercedes boss Toto Wolff told Sky F1 the right call would have been to bring Hamilton in on lap 38, one lap after this teammate Bottas.

'For many, this team has been a safe haven': Matildas players say they have supportive culture amid abuse allegations