If ever a comment summarised the effect a world-class all-rounder can have on a cricket contest, it was that which came from the mouth of David Gower, standing at the non-striker’s end during the first innings of the 1986 Brisbane Test: “I should be telling you to calm down, but I’m having too much fun.”

Of course, he was addressing Ian Terence Botham.

Cricket presents no more arresting sight than a batsman’s destruction of a macho fast bowler.

That day, Botham was inflicting such punishment on Merv Hughes.

His Beefness walked in at 4-198, the contest evenly poised, but the tourists were so unfancied that Martin Johnson, a member of the England press pack, had infamously just written: “England have only three major problems. They can’t bat, they can’t bowl and they can’t field.”

Botham didn’t just bat, he savaged 138 from 174 deliveries. It was his first Test century in three years.

England surged to a seven-wicket victory. The Australians watched the Ashes disappear like one of Botham’s lusty blows.

On Monday, 35 years on from that, Ben Stokes made himself available for the upcoming Ashes.

He is not Ian Botham, although statistically speaking, he is not far off.

His decision — coming after a mental health break and a finger injury whose impact on his coruscating batting remains to be seen — has, in these times of very small mercies, rightly been received as a very good thing in every conceivable way.

Thanks to the general drudgery of the intervening years, Stokes’s spectacular, game-winning antics of the 2019 Headingley Test still loom like recent events.

This is the summer of Stokes, you’re just living in it 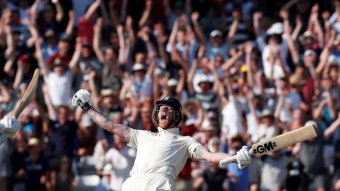 Ben Stokes’s lone hand at Headingley will go down in the annals as the greatest Test innings of all time, adding further legend to the Ashes’ most storied ground, writes Geoff Lemon.

Australia has since played little, England a lot, although not so convincingly in the times Stokes has been missing.

All of which has served to present Stokes as the difference-maker who’ll single-handedly transform a team which otherwise boasts only one world-class batsman and two brilliant but aged fast bowlers into an outfit that will make the Ashes a genuine contest.

You will remember those Ashes mostly for the sight of Mitchell Johnson careening his way past demoralised batsmen like a Hell’s Angel.

It was also the first time Stokes toured. With 279 runs at 34.87, he led England’s dismal batting averages; his 15 wickets at 32.8 were bettered only by Stuart Broad.

But the argument breaks down pretty quickly when results are considered: Australia won 5-0, ending English careers, so Stokes’s pyrotechnics amounted to little.

As spirit-lifting as it would be to see Stokes in full flight this summer, a harsher precedent still can be found across the breadth of the last 40 Australian Test summers: Put simply, Australia is a grim destination for a fast-bowling all-rounders and a place suited to doing only one thing well.

Even Botham’s frenzy was an anomaly: he barely troubled the scorers for the rest of that ’86/87 summer and in his other Ashes campaigns in Australia, he never dominated a single match so comprehensively.

Imran Khan, Botham’s peer in most senses, took plenty of wickets but only made Test runs in Australia in the summer when he couldn’t bowl.

Kapil Dev and Wasim Akram, occasionally masterful stroke players elsewhere, never fired with the bat down under. Jacques Kallis, in his five attempts, made plenty of runs but was only a bit-player with the ball; Richard Hadlee vice versa.

Others who succeed with both bat and ball were either game-winning with neither (Chris Cairns) or played in such terrible teams that it barely mattered (Dwayne Bravo); the great West Indies teams of previous generations — like most great teams — didn’t even need an all-rounder.

In 2017/18, the last time Stokes was missing, skilful and dependable Chris Woakes was a shadow of himself, let alone of the man he replaced.

Oversimplified explanations for the all-rounder’s plight go something like this:

On the bowling side, it is easier for pacemen to take Test wickets in Australia when the Kookaburra is new, not when it has turned into a rag.

This is particularly challenging for Stokes, a gifted exponent of reverse swing who will rarely find a ball or conditions conducive to it. Better bowlers have been ground into submission by frontrunning Australian batting line-ups.

On the batting side, Stokes contends with Australia’s one great strength: two phenomenal fast bowlers who might make mincemeat of all bar England skipper Joe Root, meaning Stokes could often contend with downward momentum and, with apologies to Jack Leach, a shaky tail for company.

The other way of looking at it is that Stokes has an opportunity to defy history and make a living legend of himself: If he can pull off the impossible again, and sustain it for as long as it takes to tilt the summer’s momentum, should he not be placed in the pantheon of Botham, or even beyond?

Yes, it is still Australia’s Ashes series to lose, but stranger things have happened and better teams have lost.

Martin Johnson came up with a lesser-known quip at the end of the 1986-87 summer for just such a moment: “Right line, wrong team.”

Matildas' growing pains on display in thrilling draw with Brazil