Immortals Fenyx Rising – The Lost Gods has arrived on Xbox Series X|S and Xbox One, introducing a new overhead view, a new hero, and new ways to play. The third DLC chapter for Immortals Fenyx Rising swings its focus back to Greek Mythology, where cataclysmic disasters are ripping the mortal world apart. Fenyx, now a god, chooses a mortal named Ash to find the lost gods of Olympos, re-unify the Pantheon, and restore balance to the world.

Ash’s adventure unfolds from a top-down perspective in a new land, the Pyrite Island, where Ash will need to track down Hades, Poseidon, Demeter, Boreas, and Hestia, and convince them to come home. Naturally, this involves solving a lot of environmental puzzles and pummeling a lot of monsters – including the venomous, burrowing Abas and ice-wielding Telchines, which are new to the game.

With the overhead view comes a new, brawler-inspired approach to combat that features faster pacing and more enemies on screen at once. Players can also customize their approach to battle by applying unlockable buffs and other bonuses to Ash’s abilities to create different builds. Additionally, Ash can wield new abilities: Nature’s Fury, a continuous beam of destruction that deals more damage the longer Ash can keep it going; and Catastrophe Quake, which knocks down any surrounding enemies with a powerful stomp.

Immortals Fenyx Rising – The Lost Gods is available now to Season Pass owners, or available as a separate purchase via the Xbox Store, and is playable whether or not you’ve finished the main game or the other DLC chapters. (Those who haven’t experienced Fenyx’s adventure yet can also grab the free demo, which features a self-contained side story specially designed to show off what Fenyx can do.) If you’re ready to step into Ash’s sandals, there’s a whole new hero’s journey to experience, so grab the DLC and get started – the gods aren’t going to reunite themselves, after all. 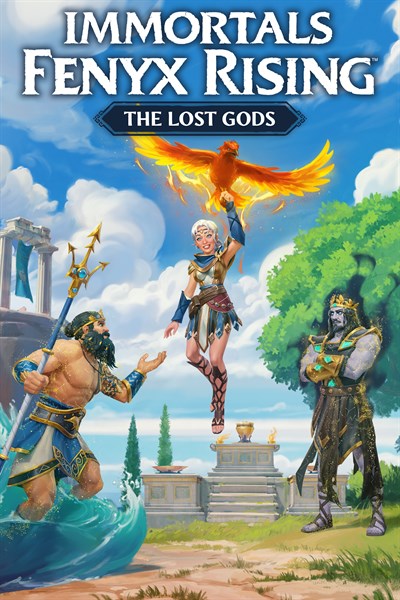 Expand your adventure with the third DLC, The Lost Gods.

Meet Ash, a new hero on an epic journey to reunite the Greek gods, including legends like Poseidon, Hades, and more. Unlock her powers using a brand-new, customizable upgrade system and bring the gods back to the Pantheon.

Play as Fenyx, a new, winged demigod, on a quest to save the Greek gods. The fate of the world is at stake – you are the gods’ last hope.

– Wield the powers of the gods, like Achilles’ sword and Daidalos’ wings, to battle powerful enemies and solve ancient puzzles.
– Fight iconic mythological beasts like Cyclops and Medusa in dynamic combat in the air and on the ground.
– Use your skills and diverse weapons, including self-guided arrows, telekinesis, and more, for devastating damage.
– Discover a stylized open world across seven unique regions, each inspired by the gods.