We’re excited to announce our first installment in the new Warfare series! Warfare 1 focuses on the engineer by both expanding the engineer’s arsenal, as well as bringing a series of new quality-of-life features to Space Engineers combat. Warfare 1 expands your creative possibilities, providing a series of new blocks aimed at pushing the limits of battlefield innovation.

As with our previous updates, this DLC and update will be released on all supported platforms simultaneously. We want you to enjoy Space Engineers on your platform of choice! Ensuring proper support for all platforms means proper support for all features and functionality, including dedicated servers. Warfare 1: Field Engineer is multiplayer-focused and the content of the Field Engineer DLC is designed to be enjoyed with friends.

As part of our continued efforts to ensure the best possible Space Engineers experience, Xbox and PC players can now play in the same space, on the same server, via our new Crossplay update, released earlier last month!

A true rework of engineer-based combat could hardly be called complete without an arsenal of specialist weapons, suited for every battlefield condition. Pistols will be making their long-awaited debut. The new S series standard-issue sidearm is built for use in even the most hostile environments: Simple, reliable, dependable. When a sidearm is not enough, the Space Engineers rifle is reborn as the MR series. A staple of both military and police forces it is an exceptionally reliable rifle. Easy to use, easy to clean. Looking for something that packs more of a punch? The Rocket launcher is the weapon of choice when faced with mechanized opposition.

Warfare 1: Field Engineer simply wouldn’t be complete without a custom battlefield to test your combat prowess. Gather your team and face off against two other teams of four and test your combat readiness in our newest, action-packed, close combat scenario The Uranium Heist! Gather the uranium, repair your escape pod, and fight for victory!

Warfare 1: Field Engineer provides you with new choices in how you create & destroy. Field Engineers is the first installment in our all-new Warfare content! That’s right, this is only the beginning of our exploration into conflict and warfare in the Space Engineers universe.

Warfare 1 doesn’t just focus on the Engineer though, it also includes new blocks to outfit your base, space station, or fortress. Prepare your defense or lay siege like never before!

Similar to our previous major releases, we hope you will take this opportunity to support the continued development of Space Engineers. This DLC pack consists of cosmetic items that enrich your game visually. None of the features in this package provide any advantage to players who purchase this DLC.

The price of the Warfare 1: Field Engineer Pack is $3.99 USD on the Xbox Store. Help show your continued support for Space Engineers and check out the Warfare 1: Field Engineer Pack. This update includes both free features as well as the option of paid DLC. Functional items that directly impact game mechanics are always offered as a free upgrade. Cosmetic upgrades are included as paid DLC content. This is how we structure all of our Major DLC releases and we hope you enjoy it. 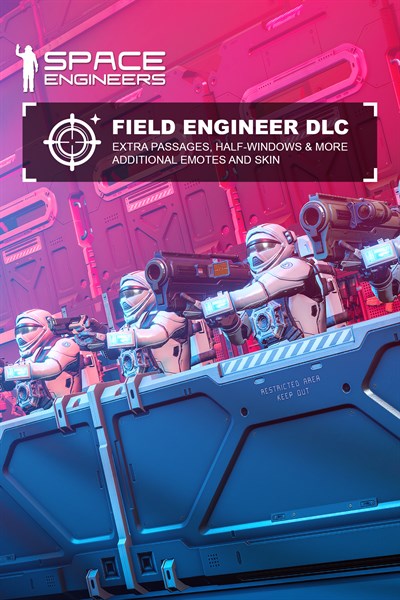 This content is not “pay to win” and the owner of the package has no advantage against other players. If you decide not to purchase the “Warfare 1” pack, but you want to play with friends or other players who did buy Warfare 1, you will still be able to join a multiplayer game or server with them and participate.


Fire Cover Block
Provides excellent cover while crouched behind it and provides a limited line of fire through the lower gaps. Comes in 2 different variations, both Normal and Corner.


Half window Block
The half window is much like the cover wall with a viewing window above it. The block is air-tight and connects nicely with vanilla window blocks. Comes in 2 different variations, both Normal and Corner.


Weapon Rack Block
The weapons rack is an open locker that stores your armament inside. A home for your new arsenal. Keep it well-stocked, well guarded, and behind lock & key. Provided in small and large grid versions.


Embrasure Block
Having the dimensions of a half armor block, this block serves as a window for players to fire through while still maximizing cover from incoming fire. An ancient innovation now brought to the far future battlefield of Space Engineers.


Two new Emotes
“Got hit”: Oh no, they got me!
“Finger guns”: Fire off a few warning shots.

Space Engineers is an open world sandbox game defined by creativity and exploration.

It is a sandbox game about engineering, construction, exploration and survival in space and on planets. Players build space ships, wheeled vehicles, space stations, planetary outposts of various sizes and uses (civil and military), pilot ships and travel through space to explore planets and gather resources to survive. Featuring both creative and survival modes, there is no limit to what can be built, utilized and explored.

Space Engineers features a realistic, volumetric-based physics engine: everything in the game can be assembled, disassembled, damaged and destroyed. The game can be played either in single or multiplayer modes.

Space Engineers is inspired by reality and by how things work. Think about modern-day NASA technology extrapolated 60 years into the future. Space Engineers strives to follow the laws of physics and doesn’t use technologies that wouldn’t be feasible in the near future.

Space Engineers concentrates on construction and exploration aspects, but can be played as a survival shooter as well. We expect players will avoid engaging in direct man-to-man combat and instead use their creativity and engineering skills to build war machines and fortifications to survive in space and on planets. Space Engineers shouldn’t be about troops; it should be about the machinery you build.

Single-player – you are the sole space engineer
Multiplayer
– Creative and survival mode with your friends
– Cooperative and competitive
– Privacy customization: offline, private, friends only, public
– A host on Xbox One and Xbox One S supports 2 player multiplayer (lobby), 1 host + 1 client
– A host on Xbox One X supports 4 player multiplayer (lobby), 1 host + 3 clients

Cargo ships – auto-piloted vessels (miners, freighters and military) that carry ore, ingots, constructions components and other materials from sector to sector. They can be looted but beware, they often contain booby traps!
Oxygen – take off character’s helmet, generate oxygen out of ice by using the oxygen generator
Hydrogen – hydrogen thrusters, hydrogen tanks and hydrogen bottles
Factions – create and join factions, determine ownership of blocks and manage the relations between them (hostile/ally).
Blueprints – save your ship or station on a blueprint and paste it into your game
GPS – create, send, receive and manage GPS coordinates in the game
Voxel hands – shape and form the asteroids and change their material (creative mode only)
Sounds – realistic and arcade mode

How to Play
Start by watching this video tutorial:http://www.SpaceEngineersGame.com/how-to-play.html

Performance Notes
The performance depends on the complexity of your world and the type of your Xbox. Simple worlds run smoothly even on old Xbox, but a more complex world with rich object interactions could overload even XBox One X.

Friday news quiz: Can you nail these 10 questions or will you crash and burn like the European Super League?

PancakeSwap Approves Burn For CAKE Why It Could Be Bullish