Sequels generally need to accomplish two things: they need to be bigger and better than their predecessors. Okay, if we’re being picky, they don’t necessarily need to be bigger, as such, but certainly better. Released back in 2017, The Darkside Detective was a surprise hit, boasting gorgeous pixelated visuals, a stellar soundtrack, and – if you’re of a certain age – hilarious pop culture references. Its sequel, The Darkside Detective: A Fumble in the Dark is certainly a bigger game in terms of scope and overall length, and with small quality-of-life changes and less reliance on referential narrative, we’d also say it’s better.

Taking place right after the first game ends, The Darkside Detective: A Fumble in the Dark sees the return of protagonist Detective Francis McQueen. In the first of six new cases, Detective McQueen is on a mission to locate his loyal, dim-witted partner, Officer Dooley, who has been missing and is presumed to be in the ‘Darkside’, a supernatural realm filled with ghosts and mysterious creatures. The narrative tone of the game still feels very much like ‘Twin Peaks’ meets ‘Ghostbusters’, but the world feels far more fleshed out in comparison to the first game, with lengthier cases and a much larger cast of characters. 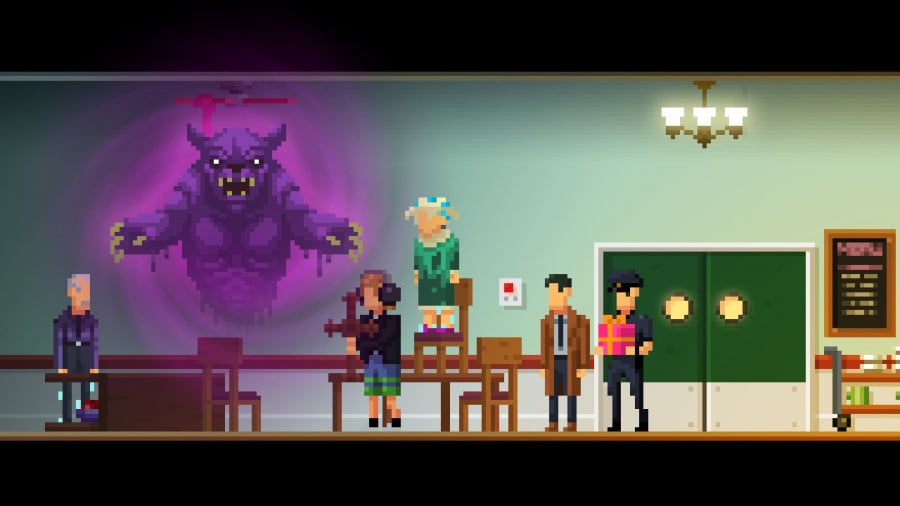 The gameplay itself feels relatively unchanged from the first entry: in classic point-and-click style you move between static scenes, selecting various objects of interest and chatting with the locals inhabiting each area. Items you’ve collected can be used elsewhere to solve puzzles, and you’ll often need to combine different objects to make entirely new ones. Selecting objects and moving between scenes is done via an in-game cursor, which feels slightly slower and smoother than the twitchy cursor found in the first game. Thankfully, if you do ever want to speed up the cursor’s speed you can move the left and right analogue sticks together in unison.

The six cases within The Darkside Detective: A Fumble in the Dark feel much grander than those found in the first game. The first case – Missing, Presumed Darkside – takes place across several different locations throughout the city of Twin Lakes, including an auction house, a TV studio, a junk yard, and an apartment. Occasionally, it does feel like some of the tasks Detective McQueen needs to complete have been included purely for the sake of artificially lengthening the narrative, but for the most part it flows reasonably well. You’re consistently introduced to new characters and areas throughout each case, with each being just as interesting as the last.

The biggest improvement comes with the writing. Where the original relied heavily on pop culture references, its sequel reins this in somewhat, focusing more on unique characters and situations. How funny or entertaining you find the narrative and dialogue is obviously entirely subjective, but there’s no denying that the developers have poured their hearts into making each and every character feel like a part of the world. Furthermore, the locations used in each case are tremendously well realised, and although the graphics are technically rather rudimentary, each and every location feels unique, and the game does a great job of making Twin Lakes feel like a very real – albeit very strange – place. 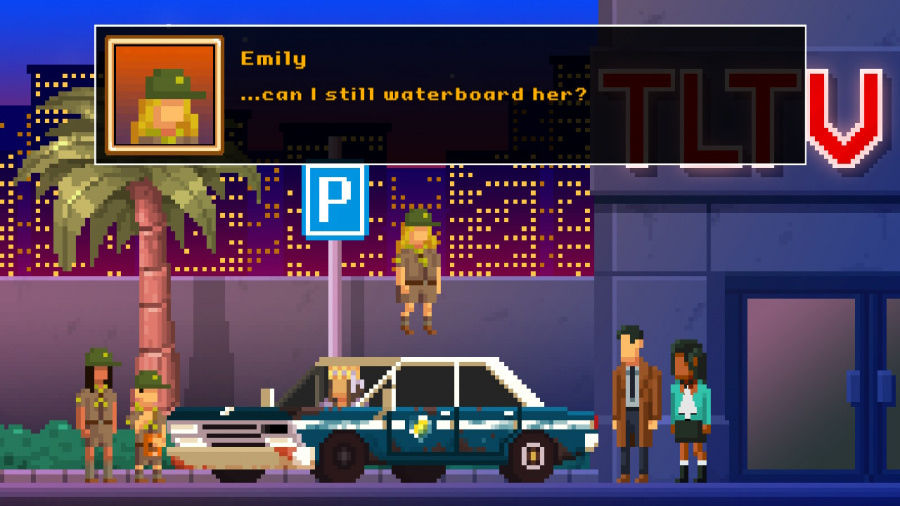 Unfortunately of course, not everything works as well as the first game. One of the biggest strengths of The Darkside Detective was its outstanding soundtrack, and while the sequel certainly retains the same synth-heavy style of tunes, they’re nowhere near as memorable as those found in the first game. We wish that the main theme from The Darkside Detective was also utilised here, as it felt like a fitting theme for a fledgling franchise, in a similar way to how the Stranger Things theme is now instantly recognisable. Alas, this isn’t the case.

On first playthrough, The Darkside Detective: A Fumble in the Dark will probably clock in at around 9 hours or so, with each case taking roughly 1.5 hours to crack. As with any adventure title, there isn’t a great deal of replay value to be found here, and repeat playthroughs will take significantly less time once you know how all of the puzzles work. Additionally, while you can play the game with no knowledge of the first title, we recommend you still play The Darkside Detective before diving into this game; the devs did include a handy recap cutscene at the start, but there are multiple characters and locations that will likely be lost on newcomers.

By cutting back on the pop culture references and focusing more on unique characters and situations, The Darkside Detective: A Fumble in the Dark is a strong follow-up to Spooky Doorway’s point-and-click adventure. The game is certainly lengthier and grander in scope, and while it occasionally feels a tad bloated with unnecessary tasks, it’s largely an immensely fun ride with the same excellent visuals from the first game. If you enjoyed The Darkside Detective, then its sequel is an absolute no-brainer; for newcomers, we recommend checking out the first game before diving into this one.