Though Shantae has gone on to become an indie gaming icon, her origins were much dicier. The original Shantae was potentially planned as a SNES or PC release before it finally settled on the Game Boy Color. Production went well, but the game required an expensive cartridge which caused many publishers to balk at the idea of backing it. After a couple years of searching, Capcom finally swooped in to save the day for WayForward, but the company sat on the release for about eight months after it had gone gold. In that window, the Game Boy Advance enjoyed a successful debut, which made the eventual release of a brand-new IP on Game Boy Color a rather unappealing concept to most consumers.

Of course, Shantae eventually got the attention she deserves, but not before her inaugural release fell into relative obscurity. Original copies of the first-run cartridge can cost up to thousands of dollars these days, but it became substantially more accessible when it came to the 3DS Virtual Console a few years ago. Now, WayForward has opted to re-release Shantae yet again for the Switch, finally bringing the entire Shantae saga to one place. Shantae is a fun game in its own right and a fascinating period piece, though it feels undoubtedly like a lesser experience when compared to its successors. 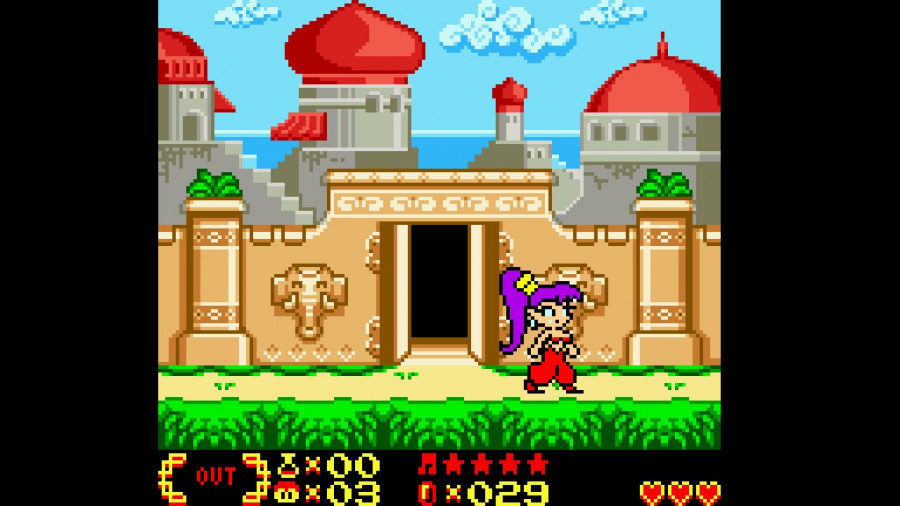 The narrative picks up with the evil pirate queen Risky Boots laying siege to Scuttle Town, and it’s up to Shantae—the resident Guardian (half…)Genie—to repel Risky’s crew of Tinkerbats. She successfully does so, but not before Risky manages to swipe a steam engine built by Mimic (who evidently isn’t Shantae’s uncle here) and sails off into the sunset. Panicked, Mimic explains that Risky could use the engine to create a terrible weapon that would enable her to rule the seas, so Shantae sets out to collect the elemental stones needed to power it before Risky gets to them first.

It’s a rather simple setup and overall tells a good story, though it must be noted that the writing feels considerably more awkward and the sense of humor that the series is now known for is mostly absent here. Shantae’s sassy personality feels a lot more toned down and characters just generally have a much flatter presence to them. You can’t expect too much, of course, as this is a GBC game from 2002, but the gap in quality is noticeable when compared to the later entries. At its worst, however, the storytelling is simply an inoffensive and unremarkable component that doesn’t much inspire strong feelings one way or the other.

As one of the last Game Boy Color games ever released, Shantae was famous for pushing the limits of its platform and providing one its most ambitious adventures. The basic gameplay takes the shape of a Metroidvania, with a small handful of dungeons scattered around its interconnected map acting as major anchor points where you progress the story and gain new abilities. Much like their equivalents in later games, these dungeons provide many of the standout moments, as they present a smart mixture of platforming, puzzle solving and combat gauntlets. 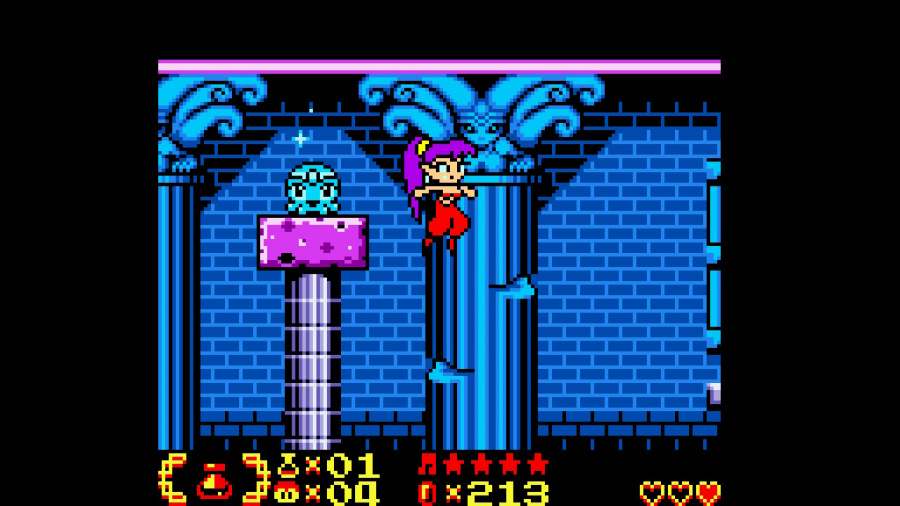 Although there aren’t any upgrades to hair whip speed or damage, the consumable weapons—like the rotating pike ball—you can pick up from the shops add a decent bit of additional depth to the rather simplistic combat. Beyond that, the animal upgrades you unlock as you go through the dungeons add some welcome traversal options to Shantae’s arsenal. None of these massively change up the game, but they almost always give you a good reason to backtrack to previous areas to grab collectibles you may have missed.

Level design, however, leaves something to be desired both in and out of the dungeons. A big part of this is due to the limited screen size that the Game Boy Color had to offer. Shantae’s sprite looks excellent, but the tradeoff is that it’s rather large and tends to make the camera feel too zoomed in as a result. We had one too many times where a platform was missed because it demanded a blind jump somewhere off camera, or an enemy we couldn’t see got in a cheap hit before they suddenly materialized onscreen with little warning.

Then there’s the issue of navigation, which proves to be quite the headache if you don’t play Shantae in extended sessions. There isn’t an in-game map at all, meaning that you’re expected to rely solely on your memory or on fan-made maps you can find online. If you’re trying to discern whether you’ve fully explored an area, or you’re even just wondering where to go next, the only solution is pretty much an ongoing trial and error of trying every avenue you can think of until you’ve found something interesting. Some may enjoy this more opaque kind of design, but it generally comes off as being needlessly backwards when you find yourself lost yet again and have no effective means of setting yourself straight. 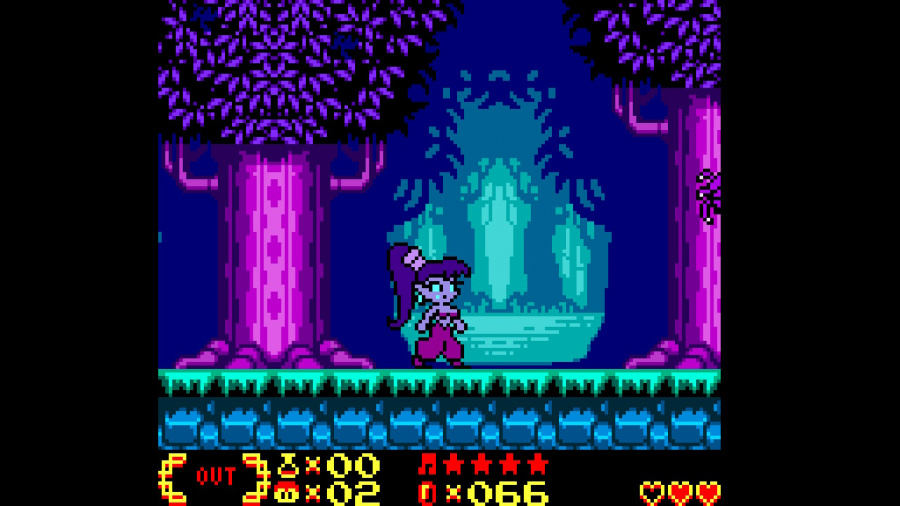 From a presentation perspective, Shantae of course manages to impress given the humble state of the hardware it released on. The 8-bit spritework remains consistently expressive and impressively animated, and there are even things like simplistic lighting changes that showcase a smart mastery of the hardware on WayForward’s part. Music is a little bit tinny and it loops quicker than we’d like, but it’s still fun to hear the early, primitive versions of some tracks that later went on to become series’ staples. This is, of course, the least visually impressive Shantae to date, but we’d suggest that viewing it as a sort of ‘demake’ of later releases helps one look past the shortcomings.

For this re-release there isn’t much in the way of exciting new content or additions, but all the expected features are here. You can choose to play in either the original or GBA-enhanced versions, and both these options have a variety of screen filters available for you to tweak the appearance. Beyond that, save state support has been worked in to make saving a hassle-free process, and you can even use it to cheese some of the tougher sections if you want. Beyond that, there’s also a small gallery where you can view some of the original concept art and marketing material, which can serve as a fun extra for the super fans of the series.

We feel it’s important to note that you should look at Shantae with some managed expectations, as this is a rather disappointing title by modern standards. It’s no stretch to say that the later releases improved in every conceivable way upon the foundation this release first laid, and it can subsequently feel like a dramatic step back in many regards. This certainly isn’t a bad game by any means, but it is an inescapably dated one. As a result it’s a rather tough sell when you can pick up Risky’s Revenge for the same price and get a much better experience, or pay a little more and get a substantially better experience with the other three games.

Shantae is a product of its time, which can be both a good and a bad thing. On one hand, this old Game Boy Color game displays an ambition and quality that outpaced many other games of its time and it easily stands as one of the best releases for that retro platform. On the other hand, it is still a game from 2002, and showcases many of the game design shortcomings one would expect from that time. It’s not a bad game by any means, then, but this is easily a game that we can only really recommend to longtime fans who are curious where Shantae got her start. If you don’t fall into that camp, we’d recommend you pick up one of the later releases and maybe come back to this one later on.

Japanese Charts: Monster Hunter Rise Loses Out On Top Spot For The First Time Since Launch